Every two or three days I will go shopping in the supermarkets. There are several here, such as Rewe, Netto and Lidl. Among all of them, I find some common points.

One is that they always set the sweets shelf in front of the checkstand. Known to all, Germany people like sweets, so the supermarkets apply promotion strategy in such ways so that people will buy more than they actually need, just as all the supermarkets like to put some small things like lollipop, chewing or cigarettes besides the checkstand. Their purpose is obviously to attract people to purchase more than they plan to do. 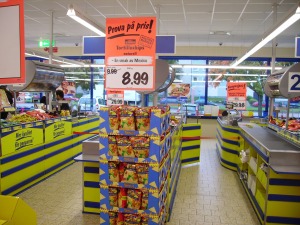 But why they choose these three things and how they can reach their goals by doing so?

Some people like to take their children with them to do shopping, and we can image the scene that the kids are beseeching to take some sweets back home but always prevented to do so just because too much sweets are bad for their teeth. So when they come to the cashier desk finally, seeing the lollipop nearby, their children will put some in the barrow quietly. When the parents are settling accounts, they see the lollipop, “however it is here now”, thinking in this way, they will buy the lollipop at last which they do not plan to buy at first. Things go the same way with the other two things. When people think that they finish their purchase according to their plan, they go to the checkout counter. Sometimes inevitably they have to wait in a queue. Standing there boredly, they will like to take something nearby to have a look, and thinking that“ they are just small things and will not count much”, they will put them in their basket unconsciously, let alone people all love chewing and cigarettes. In this way, supermarkets reach their goals to sell more and get more profits. Do not say that supermarkets can just benefit a little from it. When things get to accumulate, it will be a big profit.

Another is that oatmeal is always besides milk on the shelf. I find that Germany people like to drink milk with something tasty in it.

Have you ever heard about the Diapers and Beer story? It shows that how a department store put both of them on the same shelf because it had found out that a large group of diaper-buying population consisted of young fathers stuck at home on a Friday night. Therefore, by using data mining, they come up with this idea to do the product promotion. So is the strategy putting oatmeal and milk on the same shelf to attract people who buy milk at the same time have the access to the oatmeal. And it is true. Every time when I buy milk, I will think twice whether my oatmeal eats up or not.

Do you have the same experience with me?

If so, regain your consciousness now! Setting the sweets shelf in front of the cashier desks, supermarkets always seem to say,” my client, do you want more sweets?” After knowing the facts, we can see how brilliant the managers are, so just be clever than them!

4 thoughts on “My client, do you want more sweets?”